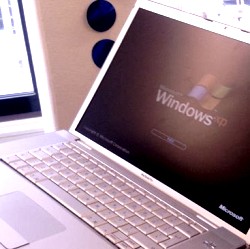 Ok, so you’ve brought a shiny new Apple Mac and now you’re definitely one of the cool crowd in your local coffee retailer. But here's the thing: it runs Mac software, yet you’ve just realised you really need to use a program that only runs on Microsoft Windows. It's ok, there are solutions out there that don't require you to ditch your sleek new piece of equipment. Here are the main options.

1. Stay with Mac software
First of all, investigate whether there's a Mac-based alternative piece of software you can use. In most cases there is an alternative application that will do what you need. It might even cost less, so search online for "Mac alternative to <insert software name here>".

2. Virtually the same thing
Virtualisation software allows you to run a 'virtual instance' of Microsoft Windows on your Mac. It runs just like any other Mac program and allows you to install and run any Windows application, switching between them as you wish. You'll still be able to access all your files and documents. Virtualisation software can even recognise hardware you plug into your Mac. For virtualisation software to work on your Mac, you need one with an Intel processor. All new Macs have this, as have most bought since 2008. Your Mac also needs to be running Mac OS X version 10.4.6 or higher. To check this, click the apple in the top left hand corner of your screen and select 'About This Mac'. Make sure the version number is higher than 10.4.6. You will also need your own copy of Windows (you'll have to buy this, if you don't already own one you can use), and some virtualisation software. VMware Fusion and Parallels Desktop are both good examples of this. You can try both for free - just download, then follow the instructions to start using Windows on your Mac.

3. Boot up with Windows
Mac OS X Snow Leopard (that’s version 10.6 or higher) comes with a piece of software called Boot Camp.  This allows you to start (or 'boot') your Mac up with Windows instead of Mac OS. This does mean you'll need to restart your Mac each time you want to use Windows, but the big benefit is that Windows gets to use all your Mac's processing power for itself. If you’re going to use heavyweight programs like photo editors or games then this is the route to go down. Of course, although you may already have Boot Camp, you'll still need a copy of Microsoft Windows. Visit the Apple site for help to get started.

4. For geeks only?
There's one last alternative, but it's not for the faint-hearted and does require you to know what the Terminal is and to be comfortable using it. Doesn't sound like you? You're better off with one of the other options above. However, if you don't mind getting your hands dirty and want to avoid the expense of buying Windows plus virtualisation software, check out the free, open source Wine project. It lets you run some (but not all) Windows applications, and although it's free, you'll still need to buy or already own each program you want to run. And, as I've already hinted, it's quite complicated. You can use another program called Winebottler to make it a bit easier, but this is still in beta, which means it's still being tested and hasn't been fully released yet. So, there you go. If you’ve decided to start using a Mac, but miss your favourite Windows application, there are solutions to your problems. Stephen Morrow is the Founder of Redhill Technologies Image of Windows XP running on a Mac from Flickr user Robert Gaal under a Creative Commons licence.