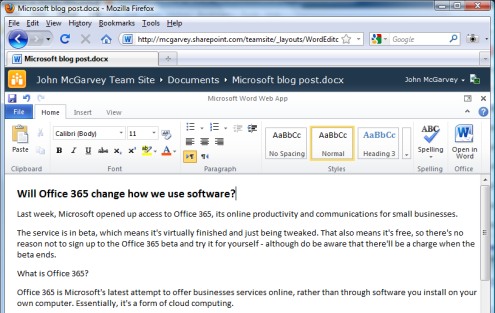 A couple of weeks ago, Microsoft opened up access to Office 365, its online productivity and communications service for businesses.

The service is in beta, which means it's virtually finished and just being tweaked. This also means it's free, so there's no reason not to sign up to the Office 365 beta and try it for yourself. Do just be aware that there'll be a charge when the beta ends.

Office 365 is Microsoft's latest attempt to offer software online, rather than making you install it on your own computer. It's a form of cloud computing.

Say, for example, you want to write a letter using Microsoft Word. With the 'old way' of doing things, you'd click the Microsoft Word icon on your desktop, then start typing.

But with Office 365, you open your web browser (like Internet Explorer, Firefox or Google Chrome) and log in to a special website. This gives you access to Microsoft Word functions. The screenshot at the top of this blog post shows you how it looks. When you save your document, it's saved online - 'in the cloud'.

As well as giving you access to a cut-down version of Microsoft Word, Office 365 includes a bunch of other stuff aimed at small businesses:

(Just to confuse matters, there's another version, called 'Enterprise', which seems to offer more functions and control, but also quite a lot more complexity.)

Why would anyone use Office 365?

There seem to be three main reasons Microsoft reckons businesses will be attracted to Office 365:

Of course, these benefits aren't unique to Office 365. They also apply to many other cloud computing services - most notably, perhaps, Google Apps, which is considered one of Office 365's main competitors.

But it'll be interesting to see what weight the Microsoft Office name carries, and whether that alone can encourage companies to switch from traditional software to this new model.

They may not have been first, but they're the biggest name in the world of business software. That's why what happens next could help determine how small firms buy and use software in the years ahead. How do you feel about it all? Are you going to try out Office 365?

Microsoft is holding a series of Webinars about Office 365 on the following dates;