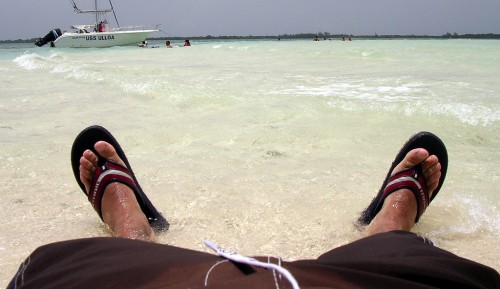 Put your feet up and relax about your business IT (Image: Cristian Borquez on Flickr)

Those are the - perfectly logical reasons - why many businesses lock down their systems tightly. They want to stop employees opening the wrong kinds of files, installing dodgy software or accessing social networks.

Fine. But as someone who's fairly IT literate, I've always found locked-down PCs highly offputting. By and large, I know what I'm doing and I know what I need to do my job. I just want the IT department to let me get on with it.

A recent piece of research has got me wondering whether this might be a growing sentiment. The 2011 Cisco Connected World Technology Report suggests that young workers (by which it means students and professionals under 30) take many factors into account when deciding where they want to work.

It's not all about the salary - the internet, flexibility and social networks can all make a difference. For instance:

The overall impression is that younger workers want more choice over what IT they use and how they use it at work.

They want more flexibility in where and when they work. And they want to be allowed to use social networks because they believe services like Facebook and Twitter are key communication tools.

Is it time to loosen up your IT?

I can almost hear the tuts from IT managers at the idea of loosening restrictions, allowing people to use their own devices and turning off web blocking software.

But here's the thing: it's happening already, whether you like it or not. If you've blocked Facebook on your work computers, your employees will just be accessing it on their phones.

Then you've got mobile devices. You might think you've banned staff using their own mobile gadgets for work. But what's to stop them loading documents onto their iPad to review on the train, or connecting a smart phone to the company Wi-Fi?

Times are changing for office IT

Times are changing. The so-called 'millennials' - the next generation of workers - have grown up using IT and computers their entire lives. We don't need to teach them how to use it at work, because they already know.

Maybe, just maybe, if we open systems up and give people more freedom to use the tools and devices they want, they'll be able to do better work.