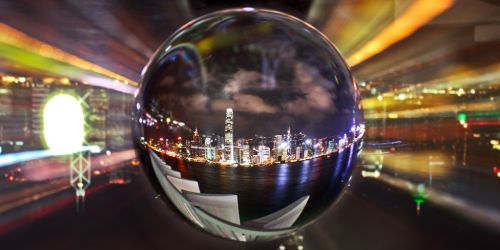 We gazed into our crystal ball this time last year. (Image: Frogman! on Flickr.)

Regular readers might remember that about a year ago we asked some of our IT Donut experts what trends we'd see in small business IT in 2012.

Twelve months on and we figured it would only be right to tot up the scores and see how accurate our experts' predictions were. So, how did they do?

Prediction one: it'll be easier to run your business using free services

Paul Lewis from Moo told us he thought we'd see more useful 'freemium' tools appearing in 2011. These are services like Dropbox and Huddle which offer useful, basic features for free and then charge if you want to access additional functions.

Even a year ago freemium services were fairly common. The idea has been around for a good few years, ever since the term was popularised by author and Wired magazine editor-in-chief, Chris Anderson.

Freemium services go hand-in-hand with cloud computing, because many cloud services follow the freemium model. As cloud computing has grown in 2011, so have the number of useful, free tools available. We rounded up five of the best a couple of months ago.

Verdict: there's a greater choice of freemium services than ever before, but most businesses are a way off being able to do everything for free. 8/10.

Prediction two: Quora to be the social media star of 2011

Tech and PR blogger Phil Szomsor reckoned question and answer social network Quora would prove its worth to businesses as a PR and customer service tool.

But after an initial burst of publicity, Quora seems to have faded somewhat from view, even though it does have an active community of users. In particular, questions about starting and running a company seem to attract a lot of answers - suggesting Quora can be a valuable source of advice for business owners.

But the site also attracts more trivial questions. That's no bad thing, but suggests perhaps Quora will find a niche as a kind of giant Notes & Queries.

Verdict: Quora has become a good place to go for business advice, but it's nowhere near as widely used by companies as other networks like Facebook and Twitter. 5/10.

David Hill from Cloudnet Telecommunications said he thought potential customers would get more impatient in 2011. Driven by the growing use of smartphones and expecting immediate responses through social media, he reckoned businesses would have to get better at providing the right information to customers at the right time.

He's certainly right in that a growing proportion of people are using smartphones while out shopping to look up information, compare prices and research products. A recent survey found that 24% of consumers have used a smartphone while shopping - often to check product details or competitor prices.

Verdict: better mobile internet access means more people expect they should be able to look up the information they need, immediately. 7/10.

Prediction four: you won't pay for software in one lump sum

This prediction had a clear connection to cloud computing too. Ciaran Kenny, from IT support firm Macnamara, told us that the traditional model of paying for business software all in one go would become less popular. Instead, companies would start to pay for software on a subscription basis.

Certainly, subscription software has gained ground since Kenny's prediction. Most notably, Microsoft launched Office 365 in June. It's a version of Microsoft Office that you pay for by the month and access over the internet.

But have we seen the death of traditional software that's paid for in one go? Not a bit of it. Microsoft still sells this version of Office too - and the shelves of PC World aren't likely to be empty of software anytime soon.

Verdict: there are more subscription-based packages available than ever, but businesses are only slowly starting to embrace them. 6/10.

Do you agree with our assessment? And what technology has made a real difference to you this year? Leave a comment to let us know.