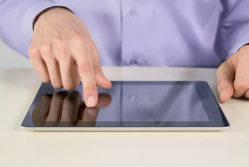 Over the years, new types of computer have come and gone. Remember the ultra-mobile PC? Or the Amstrad [email protected]? I wonder why Alan Sugar never mentions that on The Apprentice. And whatever happened to tablet computers with rotatable screens, built-in keyboards and a stylus for writing on the screen?

But every now and then, something comes along that does change things. And at the end of last year, a piece of news suggested that one new kind of computer is having a real impact – both at home and in the workplace.

Apple’s iPad reigns supreme in the UK tablet computer market. It accounts for almost three-quarters of all tablet sales. And perhaps most impressively, it turns out that Apple is selling more iPads than Dell is selling laptop computers.

Given that Dell is one of the world’s biggest computer manufacturers (the company claims it ships over 10,000 systems a day), that’s astonishing. And it strongly suggests that long-term, the iPad – plus other tablet computers, should anyone start buying them – could have a huge impact on what sort of computers we use and how we use them.

People are embracing the iPad enthusiastically, swapping full-spec laptops for the thin, light, super-easy-to-use Apple gadget. Who can blame them? No long waits while it starts up, no fiddly keys or buttons ... just a touchscreen anyone can use, plus thousands of apps.

It’s not a stretch to say that 2012 could see tablet computers establish themselves as the mobile computing tool of choice. Unless you need a full-size keyboard, it’s becoming more difficult to see what benefits are offered by traditional laptops for typical on-the-move tasks like checking email or reviewing documents.

Nobody wants a netbook any more

Just ask the companies which sell netbooks, the small, cheap, low-powered laptops that just a few years ago were poised to reshape the PC industry. Things don’t look great for them: sales have slumped 40%. Blame is being laid at the door of the iPad.

The argument stands up: to many people, netbooks are just compromised laptops. If you can’t type comfortably on the keyboard and you have to squint to see the screen, a tablet computer might well be a better option.

What’s more, machines like the iPad are developing fast. Will the combination of impressive hardware and versatile apps persuade more people to swap their netbook or laptop for a tablet?

Laptop makers certainly are worried. You can tell, because the big players are rushing to release ultrabooks, another type of computer which is like a netbook but thinner, more powerful and much more expensive.

These sleek machines have enough punch to replace your desktop computer, but are designed to start instantly and be small enough to take anywhere. They look great, they perform well and – although they can be expensive – they’re finding a spot in the market.

This time it’s the MacBook Air

But hold on – guess who makes the most successful ultrabook. Yep, that’s right: it’s Apple again, this time with the MacBook Air. This is the computer which pretty much defined what an ultrabook should be – and it certainly represents what other ultrabook manufacturers aspire to.

Put aside the ultrabook vs. netbooks vs. laptops vs. tablets debate. The real story might be Apple itself, and whether it can take a much bigger slice of the business IT market in 2012.

This is a guest post from Integral IT, a Yorkshire IT support company.