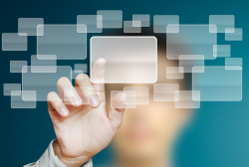 If I told you that you’ll soon have no need for individual business computers, you’d probably think I was mad. But that’s what virtual desktops could do – and within the next year or two I think they’ll be commonplace in smaller businesses.

Virtual-what? Ok, here’s how it works. At the moment, most businesses have a number of separate computers, each of which uses its own processing power to run programs and its own space to store files.

But with a virtual desktop system, all that processing power and storage space is centralised. Your computers are replaced with terminals. Little more than a screen, keyboard and mouse, they enable you to log in to a central server where your data is stored and your software run.

From the user’s perspective, there’s very little different about using a virtual desktop. The system will remember your preferences, your programs, your icons and everything else. It looks and feels just like a normal computer.

The only difference is that instead of things happening on a box under your desk, they’re happening on a server. That server might be on your premises, but most businesses will find it makes more sense to log in to a virtual desktop system over the internet.

Virtual desktop systems have been touted for years, but until now they’ve mostly only been used by big companies for specific applications. For instance, the sales team of a big firm might use a virtual desktop system to access the customer database.

Like other cloud computing services, virtual desktops store your company data outside of your business. As a result, the main perceived risk always seems to be around data security.

It’s almost like if people can’t see or touch their data then they think it isn’t somehow safe and secure. But that’s a fallacy: would you rather have your core business data on your premises, where it could be susceptible to fire, theft and flood, or stored on servers in a purpose-built data centre with round-the-clock security, strict access control – plus multiple internet connections and backup power supplies?

Actually, these precautions mean the question of security really boils down to whether you can trust your virtual desktop supplier with your data. To a large degree, that just means you taking the same security precautions as with any other cloud computing service.

Businesses are becoming more comfortable with the idea that they can use other IT suppliers to store and process data without losing control over it. As a result, over the next year or so I expect smaller companies to start trying virtual desktop systems in greater numbers.

Watch this space, because it could transform how you think about your business computers.