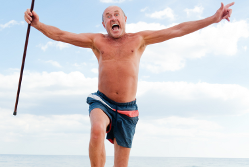 The stereotypical relationship between people over the age of 50 and computers is easy to describe. We think of our mothers, fathers and grandparents hunched over a keyboard, typing with two fingers at a snail's pace with a pained expression on their faces, trying desperately to work out why people don't just use teletext like they used to.

But in reality, this stereotype is unfair and far from the truth.

Although we used to envision the older generation wincing at the thought of being expected to use a computer, more and more people over the age of 50 are logging on every day. According to research carried out by analysts Nielsen, one in four of the 39 million Britons who log on every day are over 50.

Affectionately dubbed 'silver surfers', they are becoming more confident at the keyboard. A number of companies have set up specialist sites targeted at the older generation in order to take advantage of this trend.

There has been a 25% increase in online spending by the over 50s in the last two years. In total, they account for £1 of every £8 spent online. Indeed, more than 25% of people over 50 in the UK own either a smart phone, iPad or other form of tablet computer and they use them for all sorts of things: to purchase books and concert tickets, to sign up to online dating sites specifically aimed at the over 50s, and so on.

Should we be surprised?

Sure, nans and granddads might have just missed the boat, but mum and dad are bona fide crewmates. Computers have been involved in many of jobs since the late 1980s and workers who caught the bug will have invited computers into their homes.

Far from being the generation that was forced to accept computers, the over-50s encouraged their rise.

The vast majority of jobs in the UK will involve at least some work with a computer. You may be sat at one for eight hours every day, or you might only use one for specific tasks.

As IT makes up such a large part of our job sector, having at least basic IT skills is a requirement for many people. If the over 50s age group was as computer illiterate as often suggested, they would have been left behind years ago.

In fact it is the exact opposite that has occurred. According to figures gathered by the TUC, the jobs market has changed significantly for those over the age of 50 since 1992. The number of people in employment who are aged between 50 and 64 has risen 8.4 percentage points, from 56.5% to 64.9%.

Then there's the self-employed

So, the over 50s do possess the skills, experience and possibly patience to be successful entrepreneurs. They have much to offer the workforce.

This too, arguably, could not be achieved without at least a basic level of IT knowledge. A great deal of interaction between businesses is done online, with email the favoured method of communication.

It is clear that the over 50s generation is not as computer illiterate as most of us would be inclined to believe. In fact, they demonstrate an understanding of IT that far exceeds that of many young people, and which certainly cannot be considered basic.

As the generation that helped to deliver computers to the world, this should not really come as a great shock and although it is younger folk who like to think that they are at the forefront of technology, it is worth remembering just how much we have learned from the generation that proceeded us.

This is a guest blog post from the team at IT Rentals.