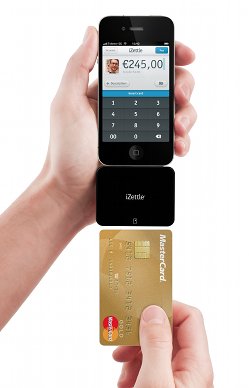 Small retailers have long known that if you want to be able to accept credit cards, you need to be good at jumping through hoops. Applying for and getting set up with a merchant account can be a lengthy process.

Things could be changing though, if a company called iZettle has its way. This Swedish firm is currently trialling a UK service that enables you to process credit card payments through your mobile phone.

When you sign up to iZettle, you get a card reader that attaches to your iPhone or iPad (see image - it's not available for other types of mobile at the moment) and an app that runs on your phone. Together, these turn your phone into a credit card terminal.

You open the app, tap in the amount to be paid, push your customer's card into the card reader, then pass the handset to them to sign on the screen. iZettle claims to work wherever you are, as long as there's an internet connection over which it can authorise the card.

The costs look reasonable too - there's a commission of about 3% on each payment, there aren't any subscription fees, and even the card reader is free.

You could use iZettle wherever you want. It would be useful for retailers, restaurants and bars, but because it runs on your mobile phone it also appears to be good for people who work on the move - like taxi drivers - or for use at events like trade shows.

No Visa, no PIN

Before you get too excited, iZettle has some disadvantages. It currently works only with MasterCard, American Express and Diners Club cards, leaving a pretty big Visa shaped hole in things.

It also seems to rely on a customer signature rather than using chip and PIN to process payments. Given the publicity-heavy switch to chip and PIN in 2005, it might unnerve your customers to find themselves having to sign again.

The first of many?

Despite these limitations, iZettle could be an early warning of what's on the horizon.

Our sister site Marketing Donut mentioned US company Square back in 2009. Since then, this similar service has grown to process $4bn worth of payments a year. PayPal is also introducing a mobile card payment service in the US.

Closer to home, mPowa and SysPay are both available or coming soon in the UK. And expect to see other companies announce similar services in the next few months.

Even if you already have a merchant account, these new players could shake up the market, potentially driving down costs and forcing established competitors to up their games. Good news, surely?