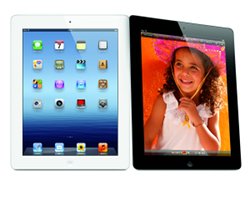 When you were growing up, did you ever do that thing where you put empty crisp packets in the oven? (Under parental supervision, of course.)

Do it right and the packets would shrink to a fraction of their former size, leaving you with a tiny but ultimately pretty useless crisp packet.

For some reason, that's the image that came to mind when I first saw iPad mini, the latest addition to Apple's iPad range. It's like a normal iPad that's shrunk.

Announced on Tuesday, iPad mini has a 7.9" screen, making it a bit bigger than the iPhone 5 and a bit smaller than the 10" iPad 3 (could this now be called the iPad maxi, or does that sound too much like a feminine hygiene product?).

Introducing iPad mini is a logical move for Apple. Recent months have seen a number of high-profile 7" tablets hit the market, including Amazon's Kindle Fire HD and the Google Nexus 7. Anyone who wanted a smaller tablet simply hasn't had an Apple product to consider.

And there definitely is a market for these compact tablets. They can be useful for super-portable computing, because they're big enough to use productively but small enough to squeeze into an already-full bag or even slip into a suit pocket.

But with iPad mini prices starting at £269, Apple risks pricing itself out of a lot of sales. Those competing tablets both come in at £100 or so under iPad mini's base price. And they both have better screens - which is surprising when you remember that the big wow factor of the larger iPad is its incredibly crisp Retina display.

Of course, iPad mini is bound to still have Apple's legendary build quality, and will run the vast range of existing iPad apps. But it's not a guaranteed success.

Paying for the name

One of the reasons the larger iPad has done so well is that Apple was the first company that got tablet computers right. There had been other attempts before, but nobody had created a tablet computer that was as stylish, practical, simple and genuinely useful as the iPad. (The same was true of the iPhone and its touch screen.)

But things have moved on since then. I don't think Apple can simply shrink its iPad, slap a big price tag on it and assume people will come running.

What's more, people who've already bought into the Apple way of doing things probably already have an iPhone or an iPad. Will they really want another touch screen device that's just a slightly different size?

I'm not convinced. If it was £100 less, Apple would sell out in moments. It would make a big dent in the tablet prospects of Amazon and Google. Yet at £269 it looks like an expensive gadget, and many businesses will struggle to justify it over its competitors.

How about you? Could you use an iPad mini in your business?