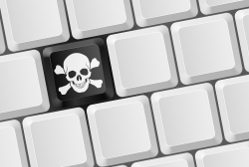 Distributed denial of service attack. DDoS for short. Four letters that are can strike terror into the heart of anyone who's been on the receiving end of one.

DDoS attacks aim to take websites offline by overwhelming them with requests for information. Typically, they involve hundreds or thousands of computers, all coordinated to bombard the site simultaneously.

Often, the owners of these computers don't even know what's going on, because the source of the attack is malware that's infected their machines.

DDoS attacks have hit the news regularly in 2012. Last month, Teresa May and the Home Office were targeted. Back in May, Webfusion - one of the UK's largest web hosts - was on the receiving end of a sustained attack.

Other victims have included Virgin Media, WikiLeaks, HSBC and Amazon.

The motives for DDoS attacks vary. Sometimes they're random. Sometimes they're political. But there's often a financial aspect. They can come from your competitors, or they can be blackmail, pure and simple. Pay up, or your website stays offline.

And although it's only big name brands that hit the news, online criminals are increasingly turning their attention to smaller companies. Without the resources to deflect attacks, they're softer targets.

"More and more smaller companies are being attacked by cyber criminals, yet many still hold the view that they are too small to be targeted."

If you're not prepared, combating a DDoS attack can be tricky. When your website's overwhelmed by spurious traffic, you may find you're unable to even log in yourself.

In fact, the possibility of a DDoS attack is something you should consider when choosing a web host, because the way they handle them can vary remarkably.

Get the right hosting

Some hosting companies will simply take your website offline completely so that their other customers aren't affected. Worse, you might get a bill for the extra traffic the attack generated.

Other web hosts will provide far more constructive assistance. Ask if they can give you examples of how they've fended off attacks in the past, and look for security features that come as part of your package, like DDoS protection.

Also make sure they keep their servers and apps up-to-date, because often the latest versions of ecommerce and content management tools are more resistant to DDoS attacks.

Have you ever suffered a DDoS attack? How did you cope?