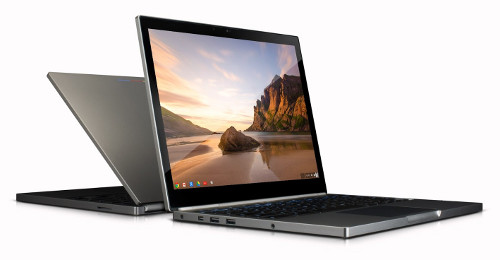 So far, Google's range of Chromebook laptops has been firmly aimed at the budget end of the market. The small, cut-down machines can come in at under £200, giving you a basic computer that's a decent - if relatively unusual - choice for mobile working.

With a Chromebook, you don't install software on the hard drive. You barely have a hard drive. Instead, you use cloud computing services to do everything online.

Want to edit a document? Log in to Google Documents. Need to check email? Use Google Mail (or your preferred email service) instead of firing up Outlook.

Many experts argue this is the way business IT is going and - with its empire of online tools and services - Google has a vested interest in making it happen.

But last week the search firm announced the Chromebook Pixel, a new model that definitely isn't for the budget-conscious. With prices starting at £1,049, it's a slick, powerful laptop that's gunning for the top end of the market.

With its aluminium case, big touchpad, full-size keyboard and powerful processor, the Chromebook Pixel has a lot in common with Apple's MacBook Pro, which has cornered a large slice of the premium laptop market.

It includes up to 64GB of storage, depending on which model you opt for. That's nothing compared to other laptops in this price bracket, which typically offer 500GB or more.

The stand-out feature of the Chromebook Pixel is its high-resolution screen. It's a super-crisp display that could even be better than the 'Retina' screen that's available on some models of the MacBook Pro and widely regarded as the best laptop screen on the market.

In fact, there's a good chance the Chromebook Pixel could become known as the 'Chromebook Retina'.

This new laptop also has a touch screen, creating interesting new possibilities for using your laptop and no doubt delighting manufacturers of screen-cleaning wipes.

Given the price of the new Chromebook and the relatively limited scope when it comes to installing software and saving files, it seems unlikely Apple will be too worried about it as competition just yet.

But the Chromebook Pixel signals that Google is keen to develop hardware to further its vision of a 'Google universe', where we use a Google device with a Google operating system to run Google apps and access Google services that store our data.

The Chromebook Pixel makes that vision seem just a little more plausible. And while most businesses won't be rushing to move away from their Windows PCs quite yet, perhaps in a few years things will look very different.