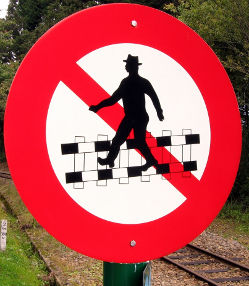 Do Not Track is a relatively new initiative designed to make it easier for people to let websites know when they don't want their activities to be tracked.

From the perspective of companies trying to do business online, tracking internet users is important. It allows them to see how people use websites and target advertising more accurately.

Yet privacy advocates argue it's currently difficult for people to control and understand what data websites collect about their internet use.

It was this situation that led to the EU cookie law, which came into full effect about a year ago. The result? A proliferation of confusing pop-up messages about cookies that don't really change anything. Well played, EU cookie law people.

Can Do Not Track make things clearer? It aims to put power in the hands of internet users via a new setting in their web browser. If you don't want websites to track what you do, you can just turn Do Not Track on.

Fine in theory. The thing is, Do Not Track is entirely voluntary, so it only works on websites that have agreed to take notice of Do Not Track requests. Currently, the list is pretty small.

But if your business relies on tracking internet users, keep an eye on Do Not Track over the next few months.

Momentum behid the technology might be growing. Microsoft Internet Explorer now comes with Do Not Track switched on as standard. Firefox will be the same from later in the year.

If political pressure or legislation forces more companies to take notice of Do Not Track requests, then it could start becoming harder to track what users do online.

And while many will argue it's about time people had better control over their internet privacy, this could have a significant impact on the online economy.