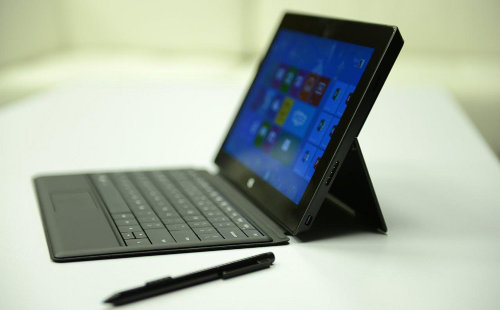 A few months ago we took a good look at the Microsoft Surface RT. This tablet computer from Microsoft is nicely built and well-rounded, but it has one glaring problem.

Although it runs a version of Windows called Windows RT, it can only run special Windows RT apps, and not your standard Windows software.

On the basis that a key reason to buy a Windows tablet is to run traditional Windows software, we reckoned most businesses would want to wait until the Surface Pro was released.

The Surface Pro is a more powerful model that does have a 'proper' version of Windows on it. This means it can run all your standard Windows software.

It's been available in the US since February, but Microsoft has finally announced it'll be available this side of the Atlantic from Thursday.

Surface Pro is your computer

Surface is a big bet for Microsoft. So far the software giant has struggled to make inroads into a tablet market dominated by Apple and Google, and it hopes this device will change that.

And maybe, just maybe it will. Initial reviews are reasonably positive.

Microsoft has done something genuinely different, building what's effectively a fully-functional Windows PC into a device that works like a tablet. While you'd struggle to use an iPad or Android tablet as your only business computer, Surface Pro can do the job pretty well.

That's because it's built from similar components as many of the super-light, super-thin ultrabook laptops on the market. The only difference is that Microsoft has crammed those components into a tablet device with an optional detachable keyboard.

Plug in a mouse, keyboard and external screen and you can quite happily use it as your main computer while you're in the office. But disconnect it and it's good to slip in your bag - even if it is a good bit thicker and heavier than other tablets of this size.

And I think that's where the Surface Pro sits in the market. With prices starting at £719 (plus another £100 or so for the keyboard), Surface Pro isn't really a direct competitor to Apple's iPad, which starts at £399.

But if you're in the market for a thin, light laptop, maybe you'd consider opting for the added tablety flexibility of a Surface Pro instead. PC Pro and the Daily Telegraph both have in-depth reviews to help you decide.