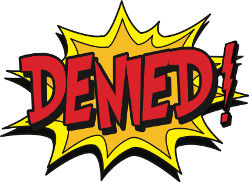 DDoS stands for distributed denial of service. A DDoS attack sees hackers coordinate a network of computers in order to overload a web server with requests.

The result is that the server can become unavailable - taking down any websites or services that run on it.

An enormous DDoS attack hit the headlines earlier this year, sparked by a row between a spam fighting company and a web hosting firm. But it's not only high-tech firms and big companies that are at risk.

Online criminals are a far cry from what they were - in recent years they've become more sophisticated, more strategic and more debilitating to smaller businesses. In fact, they can leave your company devastated by stealing data and causing downtime.

You can be hit with a DDoS attack for all manner of reasons, including:

And if you think your business is too small or insignificant to be worthy of a hacker's attention, here's what security firm Symantec had to say in its Internet Security Threat Report, released earlier this year:

“While it can be argued that the rewards of attacking a small business are less than what can be gained from a large enterprise, this is more than compensated by the fact that many small companies are typically less prepared in their cyber defenses.”

But before you panic, there are weapons you can use to protect your site and online services.

Many web hosts and internet service providers have begun to offer DDoS protection. These services monitor for unusual internet traffic and attempt to fend off DDoS attacks targeted at your site,

What's more, a number of high profile incidents have encouraged IT providers and web hosting firms to step up their DDoS defences.

If you're not sure how well-protected your website is then it's worth taking some time to investigate further - especially if you rely on your website to bring in business or sell online.

Ask your web hosting firm what defences they have in place, and, if they offer a DDoS protection service, consider adding it to your account. Your web designer or IT supplier may also be able to advise on what would be the right level of protection for your company.

Tim Pat Dufficy is the managing director and founder of ServerSpace Limited, which provides hosting and connectivity services and help clients with DDoS protection.