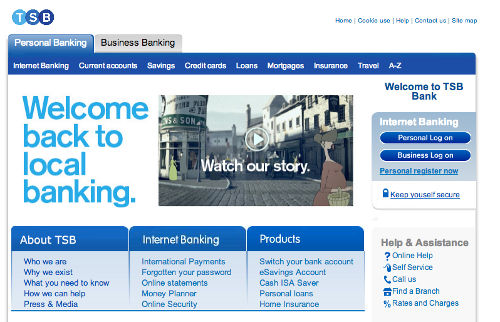 Ta-da! When you've finished putting the finishing touches to your new website, you want the world to know about it.

That often means emailing your customers, shouting about it on Twitter, posting to Facebook and maybe even paying for some ads on Google.

The tale of the new TSB

However, if you're about to set a new site free, you might want to take note of what happened to the relaunched TSB bank earlier this week.

The new bank is being spun off from Lloyds. But when it launched on Monday, its new website promptly hit problems.

Many customers reported they couldn't access the site at all. As a result, the news story that generated most attention was about the website problems, rather than about the bank's launch.

But perhaps worse than launch-day hiccups is the fact that the new bank's website has a decidedly old feel to it. I mean, look at it. Could it be any more 1999?

It's not that an old design is a bad thing in itself, if it works. But surely an organisation billing itself as 'Britain's newest bank' should at least have a vaguely fresh website.

We can all learn from this

It's almost certainly much harder when you're doing it for a brand that has a history dating back to 1810 and is part of a heavily-regulated industry.

But in this day and age, when a website is such a central part of your customer experience, it's absolutely inexcusable to pass off an outdated design as your main customer-facing website.

In a sector where trust is everything, starting out with a website that looks like it hasn't changed in ten years is not a great way to win people's confidence.