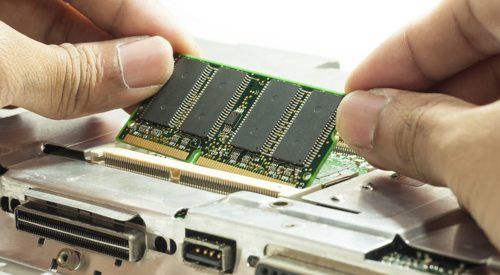 To replace our long-running series of Friday tech tips, we've invented a new feature. Appropriately, we're calling it IT for Donuts.

Starting today, every Friday we'll explain a tech term or answer a question about business IT. We'll stick to jargon-free language, so you can actually understand what we're on about.

To kick things off, we answer the question: what does RAM mean?

Ok then, what does RAM mean?

You'll have seen the term RAM in adverts for computers. You might also have noticed it mentioned in messages on your computer screen, or in the largely-incomprehensible system requirements printed on the side of software boxes.

Think of RAM as your computer's short-term memory. RAM provides space for information that your computer needs to have readily available.

For instance, when you open a piece of software, all the data relating to that software is moved to your computer's RAM. This makes it easy for your computer to get at it quickly, which means the software runs nice and fast.

In its physical form, RAM is a bunch of chips inside your computer, as pictured above.

How RAM is used by your computer

Ok, here's an example. Imagine you've just turned your computer on and no programs are running. Then you double-click a Microsoft Word document to open it.

At that point, the document will be moved from your computer's hard drive (its long-term memory) into the RAM (its short-term memory). This is because it's much quicker to access data when it's held in the RAM.

Why you need plenty of RAM

As you open more files and programs on your computer, it loads more data into the RAM. If it gets to the point where the RAM is full, your computer will slow down, because it has to shuffle data on and off the hard drive more frequently.

That's why the amount of RAM you have is important.

RAM is measured in gigabytes (GB). You don't really need to know what a GB is, but the more you have the better. If you're buying a new computer, 4GB should be fine for everyday use, but paying a little extra for 6GB might be wise in the long run.

If your computer is starting to show its age, adding more RAM is one of the most cost-effective ways to speed it up. Most computers have space inside for extra RAM, which you can buy and install yourself