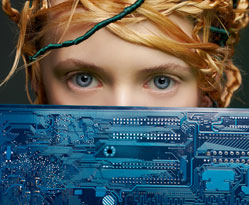 It seems that the jury is still out over women and technology. Despite some business fairs showing promising signs of women becoming increasingly visible, this week’s Times ran a piece by Antonia Senior entitled 'Sisters must programme it for themselves' bemoaning the continuing lack of women in the industry.

But is it fair to divide IT into the traditional geek territory of programming, still largely a male preserve, and the web designers, IT users and digital content creators who use the technology? And does the divide matter? Microsoft and Apple made billionaires of their creators, but a lot of development work is now a backroom job, while there are big bucks to be made in business by knowing which tools to use.

Chris Hall, whiz Drupal developer, is of the view that it’s not formal education that’s a barrier to women, or anyone else for that matter, in IT. As he says, ‘many people in successful IT careers have no formal qualifications at all, many have learned everything that supports their career via the very same devices and infrastructure they use in their daily work.’  Which makes me wonder if the supposed glass ceiling is more of a red herring.

The Dell-sponsored fifth annual Women’s Entrepreneur Network has a note of its own on women and technology claiming that ‘women especially understand that it’s not the technology itself that is important, but what connections, solutions and changes it enables you to make’.

Either way, should we be worried if one career attracts more men than women? Looking at why it happens, and making sure that the way we educate and raise our children gives them properly equal opportunities, aspirations and self-worth, is crucial. But maybe valuing both parts of the equation, and paying accordingly, is a bigger deal.

So why is our Marketing Donut pink and IT Donut blue? Well, as I write, our (male) CEO is wearing a pink shirt and our (female) head of web and digital systems a striking blue. Maybe once we stop thinking about jobs for the boys or girls we can just get on with building the careers we want.