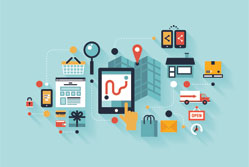 In the world of technology, 2014 has been full high-profile security breaches, wearable gadgets and new domain names.

And as the end of another year rolls around, we take a look at what's been most popular on IT Donut. So, what did you miss while you were busy running your business?

Stephen Fry leads the way with a new domain

Ever since 2013 — when the domain name system was changed — new domain name extensions like .london, .xyz and .technology have been tricking onto the market.

And in June this year, Stephen Fry became the first person to start using the short new .uk extension.

At the time, Nominet said: 'Stephen Fry's decision to switch from a .com reflects the appeal of shorter, sharper .uk domains.'

But if you search Google for Stephen Fry today, you'll see the address that comes top is stephenfry.com. Sure, www.stephenfry.uk still works, but it's not as if the actor has discarded his .com domain altogether.

A PR stunt? Surely not…

Building a good website is not easy. In July, we learnt that the new M&S website cost £150m, yet caused a dip in online sales when it was launched.

As we said at the time, it would have been easy to poke fun at this retail giant. But actually, this experience underlines how tricky it is to build a good website – even when you have a big budget and a powerful brand to draw on.

In fact, it's very common for sales and traffic to drop when you launch a redesigned website. A soft launch and comprehensive user testing can help, but it's usually best to stick with the status quo during busy periods.

In April, something called Heartbleed was big news. This was the name for a security flaw in OpenSSL, popular encryption software that protects hundreds of thousands of websites.

The breach could allow hackers to break into encrypted data while it was transferred online. OpenSSL underpins transactions and protects data on many big-name websites, so the danger was very real.

Website owners were advised to check if their own sites were affected, while consumers were warned to consider changing their passwords.

You can use the Heartbleed site checker to make sure your website isn't still affected. Our Heartbleed advice is here.

We've long suspected that business owners struggle to create IT policies that are right for their companies. Those suspicions were confirmed when we relaunched our own set of free IT policy templates in May.

The set of downloadable documents includes policies covering data protection, internet and email use and social media. They've been downloaded thousands of times since.

A new iPhone is usually big news. And when iPhone 6 emerged in the autumn, Revivaphone — which offers a kit to resuscitate liquid-damaged phones — was determined to claim the title of 'first iPhone 6 to be dunked in beer'.

Sure, it was a thinly-veiled PR stunt. But it was also an entertaining one. It prompted us to put together a quick guide to saving your phone if it's been damaged by beer, water or another liquid.

Intranets aren't going out of fashion

Until recently, we were wondering if the term 'intranet' was going slowly out of date.

The language of technology changes fast, and like 'cyberspace' or 'Website' with a capital 'W', we thought 'intranet' might be passé in the mobile-enabled, cloud-powered world we live in.

As it turns out, we're wrong. Intranets are as popular as ever. In fact, new cloud technologies are making it easier for smaller companies to build versatile employee intranets that people actually like to use.

That's why our information about creating intranets was some of our most popular in 2014.

So, how did your business find its technology in 2014. And what do you have planned for the year ahead?

Get Work partners with Google to support tradespeople
Technology will be key to prosperity after Brexit
Too little too late? IR35 review gets luke-warm reception
Most small firms wary of Open Banking