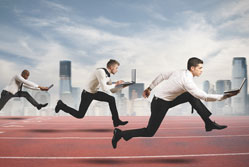 Right now, the internet offers a reasonably level playing field for everyone. No matter who you are, your data is treated in the same way as it travels through cyberspace.

Have an idea for a website or digital business? Go ahead and try it out. The internet has lowered the barriers to entry like nothing else.

The internet provides an open platform which we can all use for whatever we like. Or, as Public Knowledge puts it, 'the company that connects you to the internet does not get to control what you do on the internet.'

But will that always be the case?

Is a two-tier internet on the way?

In 2015, the internet is big business. And without internet service providers (ISPs), that business wouldn't be possible. They create and maintain most of the infrastructure that allows the digital economy to grow.

Many of these services are invisible, but they're vital. From the wires that connect your servers to cables criss-crossing the oceans, providing them costs real money.

As internet use continues to increase, ISPs have to lay on extra capacity. And a while back, some bright spark suggested a new way to manage that capacity.

ISPs could start creating 'fast lanes' on their networks. Companies would be able to pay to use these fast lanes, so that their websites and digital content reach consumers quickly.

Introducing such charges could create a two-tier internet. Companies with deep pockets could pay to have their traffic prioritised, while the rest of us would have to wait in line.

In short: how quickly your company's website loads could be determined by how much you're willing to pay.

Time is critical when you're running an online business. The longer a website takes to load, the fewer people will hang around to wait for it. Load time also has a small influence on your website's search engine rankings.

In short, getting stuck in the slow lane could mean your website doesn't get noticed – no matter how great your business idea is.

The two-tier internet threatens the idea of net neutrality, the principle that all internet traffic should be treated the same way.

In the US, net neutrality looked in serious danger last year. The FCC - which regulates interstate communications - came up with a plan that would have allowed ISPs to offer fast lanes to companies willing to pay.

The plan was abandoned after public outcry, and in February this year new rules were introduced to safeguard net neutrality.

However, the battle continues. A flurry of legal challenges from internet service providers could see the issue end up in the Supreme Court. You can bet on plenty of lobbying behind the scenes, too.

In Europe, net neutrality hangs in the balance. New rules appear to include a clause that allows online businesses to make agreements with internet service providers to guarantee specific levels of service.

That sounds a lot like a two-tier internet to us.

The end of net neutrality could have many implications for businesses and consumers.

Currently, anyone can launch a website and know that it will load as quickly as anyone else's. A two-tier internet would change that, allowing established firms to put another barrier in the way of their competitors.

That could stifle innovation and lead to a stagnation of digital services, because challenging the status quo would be more difficult.

Some businesses would pass the fast lane cost onto consumers. Yet the overall experience of using the internet could worsen as services in the slow lane become frustrating to use.

And that wouldn't just be bad for companies trying to get established online. It would be bad for anyone who uses the internet.