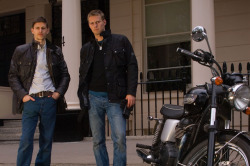 The firm, formerly Bullet Motorcycles, had already been around for a long time when Will Starrit and Andrew Taylor took it over a decade ago.

Once a popular haunt for London bikers, including celebrity riders such as Ewan McGregor, the Fulham shop was struggling when they took it on.

Having renamed the business, redesigned and refitted the store, refreshed the range and - crucially - opened an online sales outlet, Will and Andrew successfully turned Urban Rider into a ‘destination’ store for bikers from London and beyond.

They achieved this transformation by targeting both commuters and serious recreational bikers, and by having a clear separation between the bricks and mortar shop and the online store.

While the shop sells a range of scooters, motorcycles and accessories, the website focuses on a select range of clothing priced from £40-£600.

“It’s key that we sell clothing that is highly desirable and hard to track down,” says Will. “We go to the manufacturers and get exclusive deals where we can, and because they can see the quality of the website and what we stock, they usually agree.”

As a sales strategy it works. The website generates sales, but also interest, and it pulls a lot more people into the physical premises than conventional advertising could achieve by itself.

Style on a shoestring

Will and Andrew’s venture is a great example of style on a shoestring. For example, they saved the £90,000 they were quoted for the fit-out by doing the work themselves - partly thanks to Will’s talents as a graduate of the Royal College of Art.

When it came to the online shop, Will and Andrew knew they had to reflect the strong identity they had established for the store. So, even though their budget was tight, they opted to use a web designer to adapt an off-the-shelf ecommerce package.

“The software and hosting came in at under £1,000, and our total spend including design and professionally produced images was around £7,000,” Will explains. “We launched at Christmas time, and without the site we’d have lost out on at least £2k in profit.

From online to offline

“Our web presence drives extra customers to our shop,” Will says. “A guy from Oregon who’d read about Urban Rider on a biking blog dropped by and spent £700.” Such examples aren’t a one-off. Many customers are visiting the shop in person, having already browsed the website.

One German customer who comes to London every couple of months spends a few hundred pounds each time; a Spanish businessman ordered a helmet online and asked for delivery to the hotel where he had his London meeting on a particular day.

“On a Saturday half of our turnover comes from people have found us on the web, so this is a key reason to have a good-looking site,” says Will.

Web sales quickly accounted for about 15% of turnover, but the profit is significantly higher on goods sold online as the overheads are much lower. In fact, the site was profitable within four months and now sells to a worldwide market, with 75% of sales to UK customers, 20% to the USA and 5% to bikers in the rest of the world.

“We want buying from Urban Rider to be a lifestyle experience, not like buying a toothbrush,” Will concludes. “We’re using web technology to show customers a cool, edgy side to biking that they can aspire to.”

Three tips from Will

What sort of ecommerce system should you choose?
Convert reluctant customers online
SSL encryption for your website