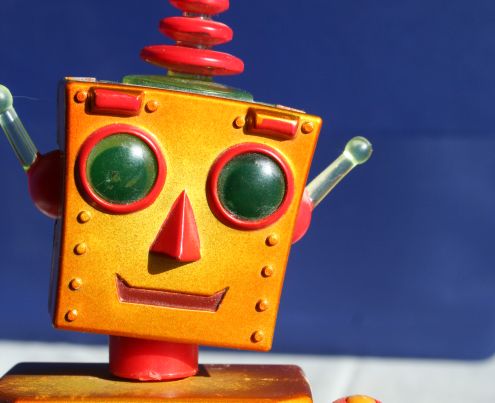 Some people are calling it 'location liberation'. But however you want to refer to it, it's about using tools like video-conferencing, collaboration technology and cloud computing to make it easier to work with other people, no matter where you are.

One development you might have seen last year came out of Japan (where else?). It's a somewhat creepy tele-operated android, which apparently helps you 'feel' the presence of another person.

The idea – apparently – is that instead of seeing your colleagues elsewhere on screen, they'll be kind of projected onto the android.

As the BBC explains, “Professor Ishiguro's system uses a motion-tracking webcam to transmit your voice, facial expressions and head movements to the Telenoid, via a high-bandwidth web connection”

That creepy appearance is actually intentional – as Ishiguro described, “we also gave the robot a minimal design, so that people can use their imagination to make it more personal.”

Will it ever catch on?

Hmmm. While it's early days for this technology, it's hard to ever imagine it in the offices and meeting rooms of small businesses up and down the country. Would you rather have a strange android figure sat in on meetings, or simply use a flatscreen TV and video camera to see who you're talking to?

The story goes on: “Holding and touching a business colleague's avatar might be a step too far...” I don't think anyone would argue with that!

While videoconferencing and other collaboration tools certainly have their detractors, many businesses use them successfully. So, on balance it's probably better to start there rather than placing an early order for a Telenoid or two.