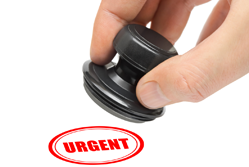 In fact, only a quarter of people think it's acceptable to wait a day for a response. A tiny seven per cent of people are prepared to wait two days.

These expectations are driven by our ‘always on' culture of email, smart phones and social media. We pressure ourselves into thinking that most email has to be answered as soon as it arrives.

But actually, it's a bit like driving: the faster we respond, the more damage we do when we make mistakes. We are confusing speed of email response with effectiveness – in essence, we're allowing the technology to dictate how we work.

Putting ourselves under pressure to respond to emails quickly only adds to the email overload that's rife in companies today. It's time to reduce this overload and set more realistic timescales for replies – allowing enough time for a considered response.

Interestingly, the pressure to reply quickly seems to lie in the mind of the recipient. I've interviewed many senior managers who have been surprised by how quickly people respond to their emails.

The survey bears this out. It shows that most respondents (83%) felt that internal senders expect a quicker reply than external senders, and that 87% believed senior managers expected a faster response than junior managers.

The devices we use for our email play a role too. Over three quarters of respondents strongly believed that people picking up email on smart phones expect a faster reply than those dealing with email on their computer.

We don't give people enough time to reply properly

The survey also highlights double standards around email response times. Although most of us now expect a response within half a day, 60% of respondents admitted they only sometimes left people sufficient time to respond to their emails and only a third (39%) of survey respondents thought they ‘frequently' left enough time.

In other words, we're sending messages requesting a fast response, even though we know we're not giving the person on the other end enough time to craft a considered reply. This is a worrying trend, as emails often need a substantive response.

It can become a vicious circle. The more you respond quickly, the more people who send you emails will expect fast replies.

To help break this cycle, we could all do with improving our email etiquette. For instance, you can add a line to your email signature stating that you check your email at regular intervals, but not as each email arrives.

Alternatively, use an auto response with the same message. Or take a lead from organisations that state on their website how long a response will take. You can certainly create a framework for use within your company, and even make it part of your email policy.

Respond in haste and repent at leisure has been the mantra of many who have found their emails used as evidence in a dispute. An incorrect or badly-thought-through response can be costly. This survey confirms that it's time for us all to recalibrate our email expectations.

Monica Seeley is an email overload and email etiquette specialist who runs Mesmo, a company offering training, coaching and other consultancy services to help businesses use technology more effectively.