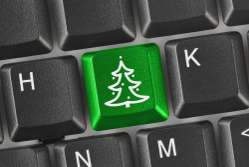 One of the statistics that's surprised me most in the run-up to this festive season is news that UK consumers are set to spend over £180m online on Christmas day. I'm not sure quite how to feel about it. Do we really dislike spending time with our families so much that we can't go even a day without whipping out the credit card and bagging a bargain on Amazon?

But then maybe it's just another confirmation that we live in a world more wired than ever. Facebook is the UK's second most-popular website (just behind Google). Mobile internet use has exploded – many of us are carrying small computers around in our pockets, and around half of internet users are getting connected while out and about. The internet is part of our everyday lives.

The biggest tech stories of 2011

Indeed, 2011 was a year when technology featured prominently in the news. There was, of course, the October loss of Steve Jobs – who arguably did more than anyone else to turn technology into something we can use without having to think about how to operate it.

But what marked 2011 out for me was that technology played a central part in many other major news stories that weren't, on the face of it, about technology at all.

There were the August riots, which many claimed were coordinated via BlackBerry mobile phones. And then there was the Arab Spring, where some protestors used social media to communicate with each other and reveal events on the ground to the wider world.

Closer to home, 2011 was the year tablet computers really started to show they could be more than a flash in the pan (despite some dissenting voices). It was the year cloud computing continued its steady expansion into the world of business computing. And – of course – it was the year when new EU laws about website cookies confused just about everyone. (Don't worry – you have a little time yet to get your website in order.)

As you may know, IT Donut is one of a family of five Donut websites. Together with Marketing Donut, Start-up Donut, Law Donut and new arrival Money Donut, 2011 has been a good year. Across all these Donuts we've built our readership up to around 90,000 visitors each month. Our monthly Donut newsletter is sent to around 54,000 people.

We've had a go at predicting what might be the big things for small businesses to watch in 2012. But no matter what the forthcoming year does hold for your business, we'll be here offering the best IT advice, help and information, whenever you need it.

In the meantime, we're putting down the keyboard, setting aside the mouse and taking a little time away from the screen to enjoy the festive period. We'll be back at the start of January. Merry Christmas!