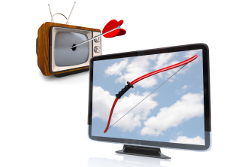 My business provides IT support to its clients. And increasingly, IT support isn’t just technology support; it’s business support. That’s because using IT as a strategic asset can set your company apart from its competitors, bringing you more sales and boosting your profits.

That’s the mantra I stick by and use as the yardstick for all my conversations with clients. Good IT will result in good business.

Not quite a straightforward upgrade

So, you can imagine my surprise when a new enquiry came in from someone who said they needed to update their IT equipment. On the surface it was a straightforward job: new computers, a server and updated software.

However, it turned out not to be quite as simple as I first thought.

Things took an unexpected turn when this potential client told me that the new computers had to run Windows 98. Yes, Windows 98, which was released nearly 14 years ago. It’s so old that Microsoft even stopped providing support for it in 2006.

When I pressed them on this, the conversation went something like this:

Potential customer: “Well, we have this invoicing software that was set up for us years ago.”

Potential customer: “The guy who set it up doesn’t work here anymore.”

Me: “I think I see where this is going.”

Potential customer: “It only works on Windows 98 computers. We have a Windows XP machine but that won’t run the software, and our Windows 98 machines are dropping like flies.”
Me [after thinking for a moment]: “I think the key issue here is to look at the software and sort it out first, rather than try to just keep Windows 98 running indefinitely.”

Bespoke software can cause problems

This business was facing is an issue I see all too often. That’s software, written or installed by an individual (not an off the shelf product) which is ‘bespoke’.

It’s great for the first year or two, while the person that installed it is around and able to help. But 15 years later (yes, they said they’ve been using it for about 15 years!) it becomes a problem because the installer or designer is no longer around.

My plan in this case is to check out the software properly before making any further suggestions. I guess it’s probably some kind of customised spreadsheet or perhaps a bespoke database.

However, the key point is that this software is hindering the company’s ability to use IT effectively. It’s stopping them from being efficient, productive and responsive to new orders.

The lesson for us all is clear. It’s vital to get advice from IT professionals who understand your business and its needs both now and in the future.

Technical people are fantastic. They can do magic things to fix software or resuscitate a dying PC. But it’s my experience that they often fail to consider the needs of your business. When you’re looking at a big investment in new software and equipment, they are far more important.

Craig Sharp is MD of Abussi.