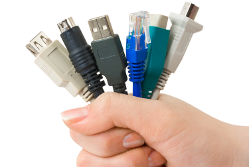 If you were listening to Radio 4's Today Programme this morning you might have heard the BBC's technology correspondent Rory Cellan-Jones attempting to broadcast live from Barcelona over a state of the art 4G mobile phone connection.

There's a big mobile technology conference happening in Barcelona at the moment and 4G is the 'next generation' mobile internet connection, promising speeds that'll eclipse our existing 3G phones. However, it wasn't this bleeding edge technology that stymied the BBC expert's attempts to broadcast live from Barcelona. It was bad design.

To accomplish the broadcast, Cellan-Jones needed to plug both a USB microphone and a 4G dongle into his Apple Mac computer. But – as he revealed on Twitter – the two plugs were too close together to connect them both at once. He ended up making the broadcast over a hotel's wireless network.

Most of us will sympathise with this predicament – we've all probably left behind a crucial cord, charger or connector when travelling with technology, or struggled to squeeze one connector in when it's tight up against another. Embarrassingly, when I first started using a laptop I went through a phase of finding myself in the office with the charger at home (or vice-versa).

But does this highlight a crucial failing of technology? With so many different connectors and sizes of plug (especially when it comes to power cables and transformers, which all seem to be different), isn't it time for better standardisation?

Listen to the segment for yourself on the BBC website. The 4G broadcast starts at around 1 hour 44 minutes in.

Has a forgotten charger, cable or connector ever left you in hot water?