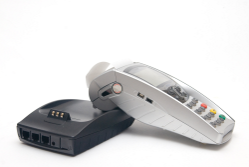 It’s nearly four years since I first received a ‘contactless’ credit card from my bank. These cards contain an extra chip, allowing you to make small purchases by waving the card over a terminal. The money is automatically taken from your account. No need to sign anything, punch in a PIN or wrestle with grubby banknotes.

Contactless cards work like the smart card tickets you use on public transport in some parts of the country. London’s Oyster is the most obvious example. Yet despite being around for several years, contactless cards have failed to take off. I’ve only tried mine once – such was the confusion it caused at the till that I’ve never felt the need to try again.

2012: the year of contactless payments?

But in 2012 we’re seeing the big banks make a renewed push with contactless technology. The Olympics are being billed as a showcase for it. And contactless chips are making their way into different devices.

But what about smaller companies?

If your existing payment terminal has contactless functions built in, you’ll just need to ask your merchant account provider to enable them.

There is, of course, a cost involved in accepting contactless payments. Some providers will charge you more to rent a contactless terminal (this article suggests £3 a month more is typical) and you’ll pay a fee on each transaction, just as with existing card payments. Retail groups have kicked up a bit of a fuss over the level of charges, and as the push towards contactless payments intensifies it seems likely these could fall.

Handling cash has a cost too, of course, and if contactless technology takes off, it could vastly reduce the amount of cash your company has to deal with. Contactless enthusiasts also claim it’ll cut queues and therefore bring you more sales.

Will contactless take off?

If contactless payments take off, they could revolutionise how small companies conduct transactions with customers. But it’s just too early to tell if the technology is really going to become dominant. You don’t want to drive customers away because you don’t offer it, but that seems unlikely in the current climate.

In fact, research suggests people are pretty apathetic towards the whole thing. Worries about Big Brother (do you want details of every tiny purchase you make recorded?), security (how easy is it to steal or clone cards?) and simple confusion about how it all works are holding consumers back.

If I were making a prediction, I’d say we’ll see a slow-but-steady adoption of the technology over the next few years. The banks have a lot invested in it and their sheer persistence will ensure a gradual uptake.

Over time, early-adopters will start to expect retailers to offer contactless payments, so if your business appeals to that sort of crowd than you’ll want to consider offering contactless payments sooner. (I bet take-up is greater in areas where geeks and tech companies cluster, like London’s ‘Silicon Roundabout’.) At that stage, you might be able to cut queues in your company by using the technology too.

But cash isn’t going anywhere soon. That’s why most smaller companies should watch the technology with interest, but not panic if they’re not on board. If contactless becomes commonplace, you’ll have plenty of time to get up to speed.

Get Work partners with Google to support tradespeople
Technology will be key to prosperity after Brexit
Too little too late? IR35 review gets luke-warm reception
Most small firms wary of Open Banking