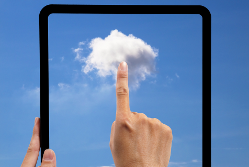 There's nothing much new about cloud computing. In fact, it's basically old-fashioned technology that's over 25 years old. It's been rebranded and respun and now gets pumped out in various different guises.

When you look at larger companies – like banks and other financial institutions – you can see they've been using server-based computing (which is essentially the same thing as cloud computing) for decades. For instance, for years now banks have given their users dumb terminals – little more than a screen, keyboard and mouse – which connect to a central server where all the actual data processing is done.

Big business has used the cloud for years

This server-based computing comes into its own when security, disaster recovery and business continuity are paramount.

In this kind of big-company IT setup, you'll find computers heavily locked down. Users can't install their own software. They get access to basic email, which is usually just about sufficient for their needs. Systems are designed and support is provided by the IT team within the company.

This approach leads to a stable, secure and hassle-free IT solution. The phone in the IT support department hardly rings, because there's not a lot that can go wrong. (Actually, big businesses generally favour ultimate reliability over offering more flexibility to users, because too many support calls are likely to means questions are asked of the IT team.)

So, roll on round to around 2006, when a few young, wise IT experts left big businesses. They'd rolled out systems for banks or insurance companies and they saw an opportunity doing the same thing for smaller companies.

Thus was born the early stages of what we now call cloud computing.

The only real difference is that the server hardware is owned by a trusted cloud computing company. They're the experts who take care of backing everything up to a separate location and monitoring things to make sure users get the best experience in terms of features and functionality.

Users of the service can log in to use software and access their data and applications from anywhere, at any time. Cloud computing: it's nothing new, but it is very powerful.

Terry Shepherd is a cloud consultant at Cirrus Stratus.