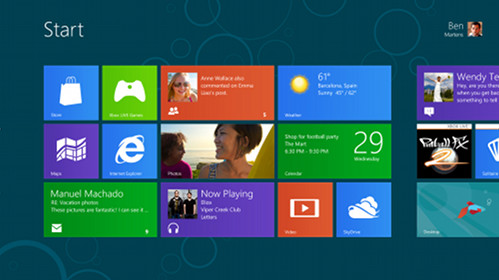 If you decide to use it, this is what Windows 8 will look like.

Windows 8. It’s the forthcoming new version of Microsoft’s overwhelmingly dominant operating system. Due for release in the autumn, it looks designed to bridge the differences between tablet and desktop computers. So, will it retain the features you’re used to, and what will it do for businesses?

If your business still uses Windows XP, Microsoft’s decade-old operating system (and still one of the best it’s ever created), you’ll need to pay special attention to Windows 8. That’s because Microsoft will stop offering security updates for Windows XP in April 2014, pretty much forcing you to upgrade to either Windows 7 or 8.

On the one hand, Windows 7 (the current version) is tried and tested. But Windows 8 is likely to last longer overall – and will offer new features that could benefit your business.

For starters, Windows 8 is aiming to be all things to all users. It aims to bridge the current gap between tablet and desktop computers. As an operating system, you’ll be able to run Windows 8 on a desktop computer, a laptop, a netbook, or a tablet.

Since it combines both a desktop and tablet functions, the question is whether they will all integrate and work together seamlessly. I’ve taken a look at a preview version of Windows 8, and these are the biggest changes I’ve seen so far:

However, one thing you can rely on is that you’ll still be able to use your favourite productivity tools like in-house software, spreadsheets, accounting software, word processors and graphics software. They should all run faster in Windows 8, too.

Kelly Smith has worked in the IT support industry in Kent for several years and has seen the constantly changing face of technology first hand and its effects on business. She currently works for Barton Technology.