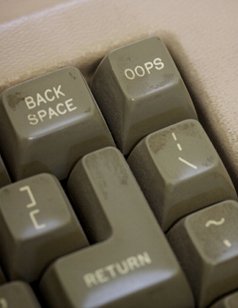 The worst bit of technology I ever bought was the original SPV smart phone. Launched in 2002, it was the first mobile phone to have a version of Microsoft Windows on it.

Even by the standards of early smart phones, it was dire. Crashes, freezes and dropped calls were normal. I cut my losses, flogged it on eBay and bought a Sony Ericsson instead.

I don't think I'm alone. When it comes to technology, most of us have made decisions we've come to regret. Maybe you paid £400 for a HP tablet computer right before they slashed the price to £89. Or perhaps you thought that Amstrad [email protected] thing would look great on your desk.

We asked our Twitter followers to tell us which tech purchases they regret most. From the response, it seems those small, light, cheap netbooks that took the world by storm a couple of years back didn't live up to their promise.

From Unitycomm, @unitycomm on Twitter:
"I was stupid enough to buy a netbook when came out. Great for weight but useless as a computer."

From @duncangeere:
"I only used my netbook about 5 times :("

Netbooks caused a big splash when first released a few years back. At around £200 or less, they promised portable computing at a low cost. Unfortunately, many people found the performance inadequate for even simple tasks.

These days we have ultrabooks instead. They're like netbooks, but a bit bigger, more powerful and much more expensive.

Twitter user @ndwebb told us his mistake was a BlackBerry mobile phone:

"Blackberry Torch, looks great but battery runs out 2/3 way through working day if you dare do anything beyond text + short call."

Poor battery life is a regular complaint with smart phones, creating a real market for items like the Mophie Juice Pack that adds extra battery capacity to an iPhone.

But the final word on poor tech purchases has to go to Alexandra Coleman, @tangfastics, who summed up what happens when you get sucked in by a new project's marketing hype:

Surely a salutary lesson for anyone currently contemplating a technology purchase.