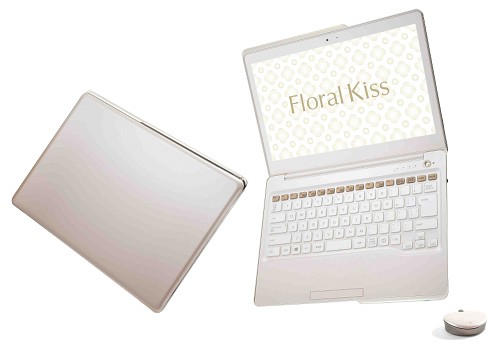 A couple of weeks ago, PC-maker Fujitsu announced a new range of PCs. According to the company's press release, the Floral Kiss line (yes, really) is 'aimed at female users'.

Take a look at the 'feminine pink' laptop (also available in 'elegant white' and 'luxury brown') and you can almost imagine the discussion that could have happened in the tech firm's product development team:

"Women aren't good with computers, are they? They don't like that techy stuff, do they? So how can we make this new laptop appeal to them?"

"I know, let's make it pink. They'll like that. And while you're at it, stick some sparkly zirconia adornments on the side too."

"That looks brilliant. I think we should pre-load some software that delivers a daily horoscope too. It'll fly off the shelves."

Yes, that's right. According to the company, this new range of laptops includes female-friendly features like 'a flip latch that can easily open the display—even by users with long fingernails. There's even 'a model designed in collaboration with the jewelry brand agete'.

It's true that Fujitsu has no intention of offering this range in the UK. But even so, I'll let you decide what kind of a message it sends in a world where only one-in-five technology workers is female and the covers of gadget magazines are dominated by female models.

Technology industry, perhaps you have some work to do.