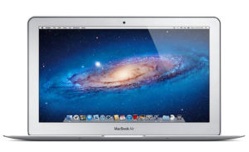 Apple's MacBook Air has been enormously successful, and still sets the standard for on-the-go computing.

This business tech bargain sees you get a decent-spec MacBook Air for £50 less than usual, which is pretty good given how hard it can be to get money off Apple products.

This thin, light laptop includes a relatively powerful Intel i5 processor, 4GB of memory and 128GB of storage, which should be more than enough for most mobile workers.

See it now on the Zavvi site >>

About this tech bargain

The MacBook Air has been widely lauded as one of the best ultraportable computers around. It's small and light enough that you can slip it in your bag just in case you think you might need it.

The battery lasts for hours and yet it's powerful enough to get proper work done. It's also built to a very high standard, with a bright screen, responsive trackpad and positive keyboard.