Smart phones are getting bigger. Clearly unhappy with the already-really-rather-large size of its new Galaxy S4 (whch has a 5" screen), Samsung recently announced a new even-more-ginormous phone.

Yes, the forthcoming Samsung Galaxy Mega (check out the name) has a massive 6.3" screen. It's a phone that is, frankly, ginormous.

To illustrate just how big it is, we've knocked up this diagram comparing it to an iPhone 5 and the Samsung Galaxy S4. The image isn't actual size, but it is to scale: 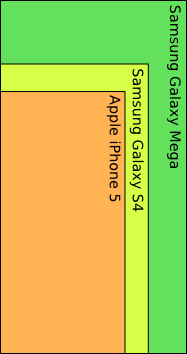 The trend towards larger displays on smart phones isn't a new one. It seems to reflect our desire to do much more with these devices than just make phone calls.

Larger screens are better-suited to watching video and playing games, as well as less-exciting functions like viewing and editing documents or making video calls.

But how big is too big? And at what point does a smart phone stop being a phone, and start being a tablet?

Well, some tech firms have pre-empted that question by creating an entirely new product category. I give you: the phablet.

Yes, really. Online seller Expansys even has a whole phablet category on its website. Phablets are a bit bigger than a typical smart phone but a bit smaller than your average tablet.

Tell friends or colleagues that you have a new phablet and they'll have no idea what you're on about, of course. But at least you'll know your new gadget has a name.

At the end of the day, as long as your phone / phablet / tablet does what you need it to, it doesn't matter what you call it.

But if you are shopping for a new smart phone, the diversity of screens available means it's important to check yours is right for the job. For instance:

Amazon Prime Day set to be bonanza for small firms
Is the 9-5 working day best for productivity?
Chancellor unveils winter plan for jobs and businesses
SMEs invest to adapt and survive