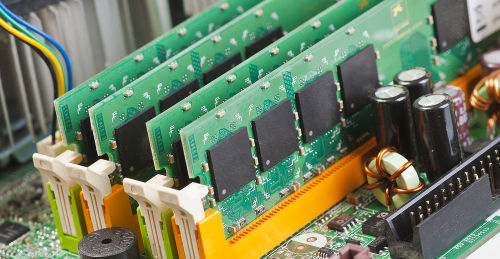 Computer on a go-slow? Microsoft Excel taking an age to do the simplest of sums? You may be thinking it's time to buy a new computer, but actually a relatively simple and cheap upgrade could give it a new lease of life.

For this week's IT tip, we look at how to upgrade the RAM (random access memory) in your computer. This can often create a dramatic boost in performance, making programs run faster and allowing you to keep using your computer for longer.

RAM is data storage that your computer uses as it runs software and opens files. You can think of it as your computer's working memory. RAM comes in the form of computer chips soldered to a small circuit board.

Data is stored in the RAM temporarily, as it's needed. For instance, when you open a piece of software, it loads into the RAM, because data in the RAM can be retrieved quickly by your computer's processor.

If you don't have enough RAM, your computer may slow down as it's forced to shuffle data in and out of the RAM, creating a performance bottleneck.

Computers are generally sold with enough RAM to run the preinstalled software at optimum speed. However, as you add more files and try to run more pieces of software at once, your RAM may no longer be adequate.

This can cause a slowdown, especially when you're trying to run several pieces of software at once or work with large files. In these circumstances, adding extra RAM will certainly help.

It's not uncommon for RAM issues to slow computers a year or so after purchase. At this point, you should consider adding extra RAM.

How much RAM do I need?

There's no such thing as too much RAM. Nowadays computers tend to come with 4 - 6GB (gigabytes) of RAM, so moving to 8GB, 12GB or even16GB should result in a real difference.

Depending on how your computer is set up, you may be able to simply plug extra RAM into a spare expansion slot. However, some PCs come with all ther RAM slots full. In that case, you need to remove the existing RAM chips and replace with higher-capacity ones. Either way, RAM just clips in and out is usually easily accessible within your computer.

Where should I buy it?

Your computer manufacturer will probably offer some sort of RAM upgrade kit. However these can cost quite a bit more than buying from a specialist RAM supplier.

Reputable suppliers include Crucial (who have a useful tool to find the right RAM for your computer) and Kingston. However, you can also buy RAM from Amazon, Dabs, eBuyer and other online merchants.

How do I install RAM?

There's no need to be intimidated by the idea of installing new memory into your computer. Although it does mean opening up your computer's case, RAM is almost always easy to spot and clip into place. It's usually even easy to add RAM to laptops.

The instructions do vary a bit depending on what model of computer you have, but here's a video to give you the general idea. Simple, isn't it?

Have you ever upgraded your RAM? Did it deliver the performance improvement you'd hoped for? Leave a comment and let us know.