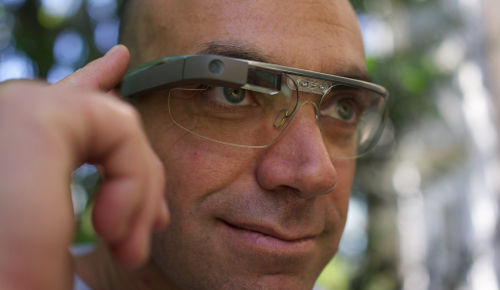 Have you got your hands on Google Glass yet, the first wearable technology from the ever-present search giant?

While it's fair to say these interactive glasses don't look particularly stylish, many experts believe they're a sign of things to come. In a few years' time, stepping outside without your wearable technology might feel as strange as leaving the house without your mobile phone does today.

Questionable styling aside, Google Glass can do some pretty neat stuff. It's voice controlled, so all you have to do is say "Ok Glass," followed by a command:

With its built in microphone, camera, mobile connectivity, earpiece and head-up display, Google Glass is the most practical, powerful wearable computer there's ever been.

But while it might be clever, isn't it stretching things just a bit to say that Google Glass could save the high street?

Well, if a new report from digital commerce solutions firm Venda is accurate, then devices like Glass could encourage people to make purchases on the high street via location-based promotions, in-store mapping and exclusive in-store offers.

The report —Wearable technology: the high street’s secret weapon? — polled a representative sample of 2,043 UK adults on their attitudes toward the new technology. Its findings make for interesting reading.

Wearable technology can make it easier for people to learn about product availability and where to find those items on the high street. In many ways, it's a natural extension of how some mobile apps work at the moment.

For instance, catalogue retailer Argos offers a mobile app. You can use it to search for a product, locate a branch nearby with stock, and even reserve one to pick up later in the day. Google Glass would make facilities like this more accessible.

According to the report, over a third of UK consumers would use Glass to plan their shopping routes and over a quarter (27%) would use the technology to search for available stock. Among 18-24 year olds, the proportion rises to 45%.

"Ok Glass, show me some deals"

Additionally, more than one in five consumers said they'd like to use the technology to unlock additional offers, which could give retailers an opportunity to boost impulse buys.

Eric Abensur is Group CEO of Venda. He reckons wearable tech has lots to recommend it to retailers and shoppers alike: “Consumers will be able to make informed purchase decisions and redeem offers, while Glass will help retailers promote the visibility of products on social networks in a novel and engaging way."

"Ok Glass, can I buy this cheaper online?"

There's a flipside, of course. Retailers are already struggling with the concept of 'showrooming', where customers use smart phones to check online prices while they browse in store.

Tools like Glass could make it even easier for people to check online costs instantly, perhaps forcing retailers to compete on factors other than price.

Or will we see a widespread ban of Glass from shops? Not likely, reckons the report, which suggests that any moves by retailers to prevent the use of wearable technology in-store will be negatively received by consumers.

In fact, almost a third of consumers (28%) felt retailers should not be allowed to ban Google Glass when shopping and over half (52%) felt retailers that banned Glass might have something to hide, such as negative product reviews.

Is it really going to catch on?

“Wearable technology has been identified as a potential driving force for the high street’s renaissance," reckons Abensur. "With this technology, margins can be preserved and conversion optimised by offering the right offer to the right customer at the right.”

He may have a point. However, it's still very early days for Glass, which isn't even officially available in the UK yet.

Given that the same research found 79% of UK adults said they would feel a degree of embarrassment using the wearable technology, it's unlikely we'll see Glass all over the high street in the near future.

But then ten years back, who'd have predicted smart phones would play such a central role in our lives?

Wearable technology is on the way. The first retailers that figure out how to exploit it could find themselves with a healthy competitive advantage.