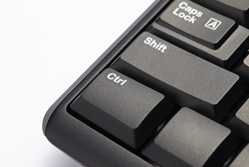 IT for Donuts is our regular weekly feature where we explain a tech term or answer a question about business IT.

This week, we reveal how the CTRL key can transform how you work with text in popular applications like Microsoft Word. Read on to learn its power.

Use CTRL to go word-by-word

If you use the left and right arrow keys on your keyboard to move through documents, you’ll be well aware that they move your cursor one letter at a time.

That's fine if you need to get to the middle of a word to make changes. But it’s not so great if you want to jump move forward or back by a few words.

No problem. Next time you use the left and right arrow keys to move through text, hold down the CTRL key. Suddenly the cursor will move one word at a time, rather than letter-by-letter.

It works with backspace, too

The CTRL key works when you’re trying to delete words too. Instead of using the backspace key to delete text letter-by-letter, hold down CTRL. Then you can delete text a word at a time, instead.

Both these tips should work in common software on Windows computers. If you use a Mac, try holding down the Option key, instead. This is the key between cmd and ctrl. On most Macs, it’s marked with two lines and the text 'alt'.