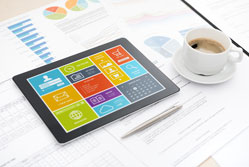 Encouraging your employees to use mobile apps at work could make them more productive and happier, according to new research. So, how can your business enjoy the benefits of apps, while avoiding the pitfalls?

The research was released by webexpenses, which — of course — makes its own mobile app.

That’s quite a claim. But if you assume productive employees are happy employees, and apps make you more productive, then it’s not a stretch to argue that more apps = happier employees.

Employees say apps save them time

According to the research, 63% of people who do use apps at work report that their favourite mobile tools save them time. Additionally, 39% say apps help them track tasks, and 17% say they use apps help to manage finances.

And, if the research is to be believed, on average mobile technology helps each employee save 86 minutes a week. That’s getting on for a day a month.

Over half say this is because apps make it easier to work on the go, and 43% claim mobile apps cut down on time spent on admin.

“Whether it’s for keeping in touch with clients or managing expenses, mobile apps save people valuable time and hassle,” reckons Michael Richards, chairman of webexpenses. “That means they can focus their resource on more productive and less frustrating tasks.”

Is it really that simple?

That’s all well and good. But I reckon things are a little more nuanced.

For starters, there’s the issue of stress. Mobile apps are only ever a tap away.

While that’s great if you want to raise an invoice on your smart phone after a successful client meeting, it’s not necessarily a good thing if you can’t stay off your phone while you’re meant to be with your family.

As we’ve mentioned before, there are a number of issues associated with heavy use of smart phones, including increased stress, sleep disorders and disruption to our body clocks.

Then there’s the problem of distractions. Mobile apps make it easy to switch between tasks, so you’re more likely to succumb to the temptation to check Twitter or open your inbox.

The research doesn’t seem to address whether employees who save time in one area are also wasting it via other mobile apps, but it doesn’t seem a great leap to imagine that every minute saved in one app is a minute to waste in another.

Don’t get me wrong. Business apps are really useful. People run entire businesses from their smart phones, so the benefits are clear for all to see.

However, the idea that more apps = happier, more productive employees seems like an oversimplification.

You need to make sure you’re giving your people access to the most appropriate apps, in a structured way. And you need to find ways to help employees achieve balance in their lives.

You can achieve 'appiness’. But you won't get there by simply throwing the door open to more apps.