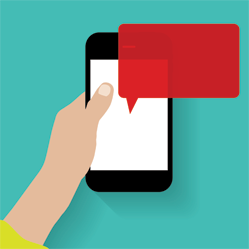 The first text message was sent back in 1992, which means the SMS message is now 22 years old.

Not many technologies make it to that sort of age without a few cracks showing, but text messages are proving remarkably resilient - even in an age of instant messaging services like WhatsApp.

The development of text message

Developed in the 1980s as a part of the GSM mobile phone standard, the first ever SMS with the words Merry Christmas wasn't actually sent from a phone, but from a computer. Up to that point, mobile phones hadn't needed to support a messaging function.

And really, it wasn't until mobile operators dramatically improved the user experience in the late 1990s and early 2000s that SMS really took off.

The development of text messaging was spearheaded by the UK and Scandinavian countries, but it really didn't take long for SMS to spread globally.

For instance, in the US text messaging really exploded when text voting was introduced in the American Idol TV show.

New applications keep emerging for text messages, even though the technology is well into its third decade.

Banks have picked up on the fact that professional SMS platforms have greatly improved their security features in the last few years, allowing financial institutions to use text messages to deliver sensitive information.

In fact, security is a common theme for text messages. In 2014, two-factor authentication - which often relies on SMS - has been thrown into the spotlight.

High profile security breaches - such as the iCloud hack - have seen a wide scale roll out of SMS based two-factor authentication. This turns any mobile phone into an extra layer of security, without requiring extra equipment.

The future of SMS

Text messages provide a robust channel that's ideal for emergencies, allowing public services to broadcast information. It can also be a good fall back option for mobile users when voice or data services are down.

The increasing numbers of cities and counties across the US rolling out text-to-911 services is just one example of how SMS is growing around the world.

To put it simply, text messages aren't going anywhere. The technology might be 22 years old, but the way in which it continues to adapt and evolve marks it as a technology that will stand the test of time.