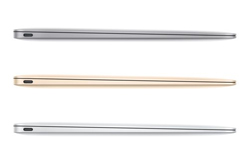 For years, Apple has represented innovation done right. What sets the tech giant apart from the rest is that its innovation was designed on the basis of user experience

That approach has delivered success for Apple time and time again. But now, I think Apple might be messing with this tried and tested formula.

Apple recently released its new MacBook. As usual, the company had lofty ambitions when designing this new bit of kit, claiming it ‘set out to do the impossible'.

But I think this latest MacBook innovates for the sake of innovation.

For instance, a ground-breaking feature used on other Apple laptops is the MagSafe charger. This magnetic connector was used to hook the charger up to your laptop.

Because MagSafe uses magnetism to hold the charging cable in position, it pulls out of the socket relatively easily if tugged. And that means if someone trips over your cable, your laptop is less likely to end up crashing to the floor.

I believe there are two questions to ask here: did Apple need to remove the magnetic charger? And if so, why?

Apple wanted its new MacBook to be thinner and lighter. It appears to have removed the MagSafe connector because it was too big.

But why does the MacBook need to be thinner? Doesn't the MacBook Air already do a good job as an ultra-light, ultra-thin computer?

With the loss of its MagSafe connector, Apple has innovated for the sake of innovation. It's become obsessed with size and weight, rather than staying focused on the overall customer experience

And this leads us to the lessons we need to learn as business owners. Innovation for the sake of innovation has toppled many businesses at their peak. Here are three examples.

In 1985 Coca-Cola was trying to win the Coke-Pepsi war.

Its bright idea? Change the much-loved Coca-Cola formula and replace it with the ‘new Coke'. Cue an enormously negative consumer reaction and a firestorm of protest.

Coke's original formula was rebranded as ‘Coca-Cola Classic' and reintroduced less than three months later. New Coke hung around until 2002, but only accounted for a tiny proportion of the company's sales.

Quite simply, Coca-Cola failed to understand what the drink meant to its customers.

The company focused on taste, smell, design and branding, but failed to understand that Coca-Cola meant far more to people. Coca-Cola was an experience.

Still, the company realised when it had made a mistake and learnt the lesson. Today, you'll notice that Coke marketing often focuses on the experience of drinking Coca-Cola.

Many of us had first-hand experience of the widely-despised Windows Vista.

Microsoft trumpeted it as a revolutionary new operative system, but it received poor reviews. InfoWorld rated it number two in tech's all-time 25 flops.

Vista probably helped to drive PC users towards Apple computers. Indeed, Apple capitalised on the opportunity with its 'I'm a Mac' advertising campaign.

Microsoft has since begun to learn that customers look for an experience over features or 'innovation'. For instance, one video that heralds the release of Windows 10 uses the word ‘experience' over 20 times.

The proof will be in the pudding, with Windows 10 due later this year. It could be Microsoft's opportunity to bounce back, hitting Apple where it hurts.

3. Samsung and the Galaxy 6

The Samsung Galaxy 6 smart phone is new, but has Samsung made a mistake?

Previously, Samsung and its customers would brag to Apple users about the ability to add hardware features to their smartphones – something you cannot easily do with Apple products.

Samsung customers are proud that they can easily add memory and replace the batteries in their handsets.

Yet for some reason, Samsung has removed these features from its new Samsung Galaxy 6. Its created a ‘static' phone, like the Apple iPhone. This creates two problems:

If Samsung customers desert the company in greater numbers, the company could find itself losing market share as well as loyal fans.

From peak to average

Many great companies have become average at the peak of their success.

Confident and buoyed by success, they decided to innovate for the sake of innovating, rather than staying focused on customer experience.

Every business owner, big or small, should learn from the mistakes of these giants. If they can suffer from ‘over innovation' then imagine what it could do to your business.

Whenever you think about launching a new product or updating an existing service, think about your customers. What do they want? What is the experience like for them?

Will the new MacBook herald the decline of Apple? In time, we'll see - but in my opinion, it could. You read it here first!

Dominic Kitchin is director and founder of Saxonbury & Kent.