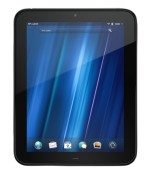 Word has reached us (thanks PC Pro) that Dixons will slash the price of HP's TouchPad Tablet PCs from 6pm today. According to the company's Mark Webb, you'll be able to pick up the 16GB version of the tablet computer for £89. The larger 32GB version will cost £115.

The reason for the huge reduction? HP announced last week that it's pulling out of the tablet computer business, triggering a fire sale in the US that now looks like it'll be mirrored over here.

With these products previously retailing for £400 or more, and competitors like the iPad 2 similarly expensive, this does look like a real bargain. But even if you can get on the Dixons site to buy one (we're predicting enormous demand for the limited supply), is it worth it?

You'll be paying around £100 for a tablet PC with no real app 'ecosystem' (so there's not much you can install onto it). Still, you'll be able to browse websites, watch video and use maps. And that might be enough to persuade many people to part with the cash. We're seriously considering it.

But do be aware of the limitations if you're tempted. Going by this review you can expect sluggish performance compared to an iPad 2, limited (or non-existent) abilities to load and edit Microsoft Office documents, and a unit that's less-pleasing to hold than many of its competitors. There's another review here to help you make a snap decision.

Despite these drawbacks, a bargain HP TouchPad might still be worthy of consideration if you want to dip a toe in the world of tablet computing. HP is promising to provide support for the tablet, and expects customers to continue to receive updates and enhancements.

Don't expect the TouchPad to match an iPad, In fact, to be safe, see it as a web browser that can play video and show you maps, and not much else. But even with those relatively low expectations, this is one £100 tablet that could be a bit of a bargain.

You should be able to buy online from 6pm today at Dixons, PC World and Currys. Good luck!