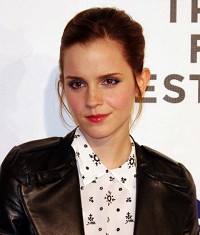 While the world's attention is diverted by a story involving a member of the Royal Family and partial nudity, don't let your guard down. Although the Duchess of Cambridge may be in the headlines today, there's a far more urgent threat to your IT systems out there: Emma Watson.

Security firm McAfee reckons the Harry Potter star is 2012's most dangerous celebrity. And it's not because she's particularly adept at hacking into Windows XP or an expert at guessing passwords (although who knows what damage a few well-placed spells could wreak?).

No, according to McAfee's research, anyone searching online using terms like 'Emma Watson and nude pictures' runs a high risk of landing on a dangerous website that's infected with malware. As the firm explains:

"McAfee research found that searching for the latest Emma Watson pictures and downloads yields more than a 12.6% chance of landing on a website that has tested positive for online threats, such as spyware, adware, spam, phishing, viruses and other malware."

Now, you might justifiably argue that anyone searching for things like that deserves everything they get from the web's seedy underbelly. But if they're doing it on work time, using your company computers, you should be worried.

Sure, you can discipline the employee responsible, but if your server's infected with a virus or a trojan has stolen your customer list then you'll have bigger problems to worry about than whether your staff member actually found what they were looking for.

Your company policies should - of course - make it clear that this sort of thing is not allowed, but that's not much use either once your computers are infected. And that's why every single PC in your company should have security software installed and up-to-date.

Packages like McAfee's own All Access software (£74.99) will guard against viruses, trojans and spyware, and show a warning screen when you try to visit a dodgy website. Alternatives include AVG Internet Security (£97.99) or Kaspersky's Small Office Security package (possibly best value of the lot because it covers five computers for £159.99).

While packages like these won't entirely guard against employee mistakes, stupidity or bad luck, they do provide a strong line of defence for your company. Even if you're not in the habit of searching for nude pictures of Harry Potter actors.