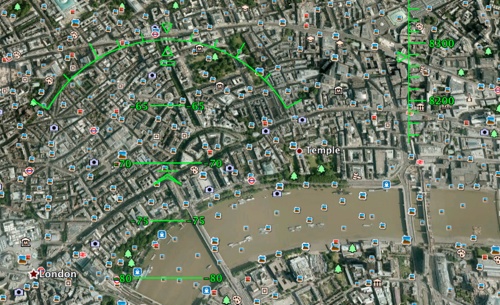 Flying over London in Google Earth.

As we're about to head off for a nice long weekend, instead of the usual useful business IT tip of the week, this time round we thought we'd give you some useless ones. They're arguably more fun though.

Easter eggs aren't just big bits of chocolate you eat at this time of year. They're also hidden features in software that can be revealed if you know how. Here are our top four Easter eggs.

1. Fly a plane in Google Earth

You'll need to have Google Earth installed on your computer for this one, but it's worth getting just to see it in action.

Once you've opened Google Earth on your computer, press CTRL + ALT + A on your keyboard (on a Mac, hit CMD + ALT + A).

You'll enter the secret(ish) flight simulator mode, which allows you to pilot a plane through Google Earth. Be warned though, it's not easy to get the hang of. More instructions here.

2. See the beginnings of Firefox

Firefox may be losing ground to Google Chrome in the web browser wars, but it still has a surprise up its sleeve.

To see this Easter egg in action, open a new Firefox window, type about:mozilla into the address bar, then hit Enter. You should see a quote from The Book of Mozilla about the birth of Firefox. (Mozilla is the non-profit organisation behind Firefox.)

3. Turn your search on its head

Go on, hop on over to Google. Then type in do a barrel roll and hit Enter. You can also try searching for tilt.

(Warning: not for those who get motion sick easily.)

4 Play Snake on your Mac

Readers of a certain age will remember the game Snake from their Nokia phones with fondness.

But did you know you can play it on your Mac? Go to Applications, then Utilities, then Terminal. In the windows that opens, type emacs, then hit Enter.

A text editor called Emacs will open. Hold Esc and tap X, then once the cursor is at the bottom of the screen, type snake and hit Enter. Then prepare to waste the rest of your afternoon.

I'd hoped to include more Microsoft Easter eggs here, but it seems that by-and-large the company has stopped including them in its software. Spoilsports!