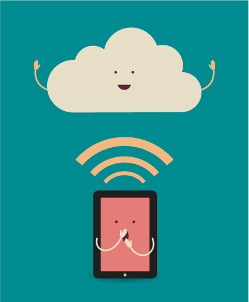 Would you believe that 7% of businesses don't have an internet connection at all, and 2% rely only on smart phones or tablet computers with mobile internet access?

It seems scarcely credible that any company could survive without being online, but according to the Open University's quarterly survey of British small businesses, there's a small group that still manages without broadband of any kind at all.

And while IT suppliers and industry experts are often quick to talk up the popularity of cloud computing, this survey paints something of a different picture.

More than 21% of respondents said they're now using cloud providers for back office services, which is a significant increase on the 8% two years ago.

However, it still suggests the majority of businesses aren't yet using the cloud for tasks like accounting, customer relationship management (CRM) and business planning.

According to this survey, that's because many companies still have significant concerns about security, privacy and reliability. Take Keith Appleyard, a survey respondent who's an honorary trustee of Fiveways Playcentre, a Brighton-based playgroup that's been established for over 30 years.

"I don't trust the cloud," he explains. "I don't honestly think we'll put children's records in the cloud."

As a former American Express IT director, he's perhaps better-qualified than most to understand the issues. "With cloud computing, you don't even know where it is ... I speak at conferences, at IT security conferences; I'm the biggest sceptic on the planet."

It's easy to get taken in by the hype around cloud computing. But in truth, are businesses really turning to it as much as some pundits would have us believe?