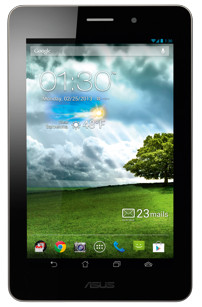 It's going head-to-head with devices like Google's Nexus (which is actually built by Asus) and the Amazon Kindle Fire. At £179 it offers exceptional value for money.

With good reviews, plus features and build quality that are comparable to these two key competitors, Asus hopes the Fonepad's built-in 3G and smart phone features will sway buyers towards its product.

It envisages the Fonepad as being a single device to replace both your smart phone and tabet.

We've mentioned these so-called 'phablets' before, and it's possible the Asus is one of the most elegant implementations yet.

With a slot for a 3G SIM card, you can use the Fonepad to access the internet via your mobile phone network.

And - of course - you can make and receive calls. It might be a little large to hold against your head for long features, but with a hands free kit you'll be all set.

You can buy the Fonepad online now, for £179 from these retailers: