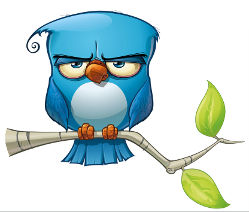 Do you publish a live feed of tweets on your business website? And has it recently stopped working? For our tip this week, we can explain why.

It's all to do with changes Twitter is making to its API.

Let's step back for a moment. API stands for application programming interface. It's a set of functions in Twitter that allows people to create applications using Twitter data.

For instance, if you use a program like Echofon or HootSuite to manage your Twitter account, that software accesses Twitter through the API. You can think of it as an official connection through which third party apps can plug in to Twitter.

So, why has our feed stopped working then?

Back last year, Twitter announced it was moving to a new version of its API.

On 11 June this year, the changeover was complete, and the old API was shut down. This means any apps or tools that use the API stopped working.

We won't go into detail about all the API changes (here's more information, if you're interested), but one big difference is that it's now harder for apps to access a list of your recent tweets.

How to fix your broken feed

If your website's Twitter feed has broken, it's probably to do with this authentication issue. There are a couple of ways to fix it, depending on how your website is built:

You might also have to tweak how tweets are displayed on your site, as Twitter now requires tweets to be displayed in a consistent way.